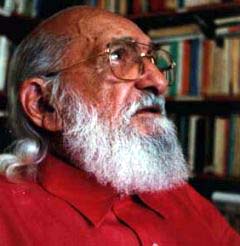 
On the night when Paulo Freire died on 2 May 1997, Rosa María Torres wrote this text, published in issue 53 of our journal, as a personal memorial. She updated the text on the 10th anniversary of his death.
- DVV International, Adult Education and Development, Number 69, Bonn, 2007.

Mystified by some, demonized by others, misunderstood by many, Paulo Freire often distanced himself from the images about him and his work that came from both theoreticians and practitioners, left wing and right wing, all over the world. Over and over again he asked his critics – but he might as well have asked his followers – to contextualize his work historically, to acknowledge the evolution of his thought and his self-criticism, and to allow him, in sum, the right to continue thinking, learning and living beyond his books and, in particular, beyond Education as a Practice of Liberty (1967) and Pedagogy of the Oppressed (1969), two of his most famous books, and where many, admirers and critics, left him virtually suspended. The Paulo Freire of the last few decades, he who died last 2 May 1997, is just as or even more alive than that of the 60s and 70s, although unfortunately unknown by the majority of the people.

Followers and detractors have often coincided in reducing Freire to a caricature of himself, locking up his thought in a single field (generally, that of adult literacy), reducing it to a number of clichés, and even to a method and a set of related techniques. Around the world, Freire evokes terms such as literacy, adult education, conscientization, dialogue, banking approach to education, circle of culture, generative word and generative theme, thematic universe, action-reflectionaction, praxis, coding and decoding, participatory research, critical knowledge and critical reflection, dialectical relationship, speaking the word, transforming reality, pedagogy of the oppressed, culture of silence, cultural invasion, cultural liberation.

A citizen of the world, the name of Freire remained closely linked to Latin America. In Europe, North America, Africa and Asia many educators identify Latin America with Paulo Freire just as many others associate it with the salsa, the guerrilla, the revolution, Che Guevara, Fidel Castro, Pelé or Maradona. And yet, it is probably in Latin America, and particularly in Brazil, his own country, where Freire has been the object of both the warmest reception and the hardest criticism. In life and in death, his ideas and positions generated and will continue to generate strong sentiments, passionate adherents and rejecters, very different and even diametrically opposed interpretations. For some, a subversive, a revolutionary, thus confronting prison and exile, and associated by many with Marxism, socialism and even communism. For others, a romantic and an idealist, a lukewarm “humanist and culturalist,” an ideologue of conscientization without a clear political base and proposal for social transformation. For some, a complex and advanced educational philosophy, theory and praxis. For others, an incomplete thinking, lacking scientific rigor, and in need of further theoretical elaboration.

Inside and outside of Latin America, many admirers credit Freire with insights and developments that form part of the historic legacy of democratic and progressive educational thinking worldwide and in which Freire himself found sources of inspiration. There are thus those who believe to be original Freirean contributions issues such as the respect for the learner and his/her knowledge, the acknowledgment of the learner’s reality as the starting point for the teaching-learning process, the importance of dialogue as a pedagogical tool, and even the invention of terms such as “praxis” or “conscientization”.  Others, on the other extreme, deny him all originality or else have long claimed to have “surpassed” Freire, either on theoretical, political, ideological or pedagogical grounds, particularly in the field of literacy and adult education.

Thus, from the early 1970s and up to now many have proclaimed they have surpassed Freire’s literacy method, a method seen by some simply as a set of techniques (generative word, dialogue between teachers and learners, coding and decoding of pictures, etc.) and by others as a broad philosophical-ideological framework (conscientization, critical thinking, unity of theory and practice, social transformation, liberation project, etc.). Also, while most people see Freire as the main instigator and inspirer of the Latin American movement of educación popular [popular education], many within the movement see it rooted in a critical approach to Freire’s work.
Continue reading