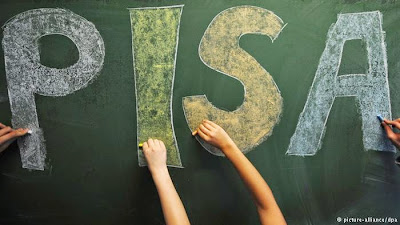 Critical voices of PISA proliferate in Latin America. At the same time, new countries are ready to participate in PISA 2015. Dissatisfaction and criticism are framed within the growing international criticism to standardized tests and to the growing importance given to educational evaluation worldwide and in this region in particular.

I compile here a few texts and statements referred to such criticism and to alternative proposals. Many more are probably out there (meetings, events, publications, fora, blogs, etc.) Please leave any additional information and comments in this blog.

The results of the last UNESCO's LLECE (Laboratorio Latinoamericano de la Calidad de la Educación) tests, applied in 2013 in 15 Latin American countries, were made public in December 2014 (TERCE: Third Regional Study on the Quality of Education). In April 2015 UNESCO will complete the information with an analysis of the "associated factors" that explain such results. TERCE results will be an important input to take stock of where we are as a region in terms of (primary) school outcomes in the three areas evaluated: language, mathematics and natural sciences in third and sixth grades.

PISA is an international test proposed by OECD. It is applied every three years, since 2000, in public and private institutions, to 15-year-old students. It covers three areas:  reading, mathematics and science. 10 countries in Latin America and the Caribbean have participated in PISA so far: Argentina, Brazil, Colombia, Costa Rica, Chile, Mexico, Panama, Perú, Trinidad & Tobago, and Uruguay. They have systematically occupied the last positions in PISA.


1. The particularities of Latin America and of its 15-year-olds, including high drop out rates.

2. Discrepancies with the culture of rankings and concern around their public exposure and use.

3. Proposal to include in the tests "situations that are relevant to the life contexts of young people in our region".

4. Need to diversify the software used to apply the tests in digital format, including Free Software.


In February 2014, the Ecuadorian government announced its decision to join PISA (PISA for Development pilot project). This article discusses the importance (or not) of participating in PISA in the case of "developing countries" and in the case of Ecuador specifically. It recommends Ecuador not to join PISA. Topics dicussed include:

a) the growing international movement against standardized tests;
b) the growing international concerns around PISA;
c) the enormous weight placed on evaluation in the country, at all levels and in all areas (Ecuador is one of the countries infected by GERM: competition, evaluation, standardization, standardized tests, excellence, titles). PISA would exarcerbate such tendencies, which contradict the spirit of Sumak Kawsay (Good Living) adopted in the new Constitution (2008); and
d) the fact that Ecuador already participates in a comparative regional evaluation: UNESCO's LLECE, which is closer and is more pertinent to the region than OECD's PISA.

The article provides also an account of recent criticism to PISA in and out of the region.

Statement by the Working Group of CLACSO. No a PISA. Por una evaluación al servicio de una educación emancipadora. (NO to PISA: Towards an evaluation serving an emancipatory education).

In Salvador, Bahía, Brazil (11-12 August, 2014), at a CLACSO Working Group meeting (LatinAmerican Council of Social Sciences) “Education Policies and Right to Education in Latin America and the Caribbean", a large group of intellectuals linked to CLACSO expressed their opposition to PISA. They highlighted seven points:


a) The assumption that good education is the one that confirms the acquisition by students of knowledge that is presumably universal, objective and apolitical, and that is measured by a Ministry of Education.

b) The alledged identity between the act of measuring and its capacity to reflect the learning processes and their improvement.

c) PISA's alledged condition of being a unique and infallible measurement instrument.

d) The relationship between the instrument and teachers' working conditions, inasmuch as it imposes orientations and incentives.

e) The impact of this correct-answer pedagogy on the subjectivity of teachers, students and families who live in constant pressure vis à vis the outcomes.

f) The mercantilization implied in an instrument that is administered globally.

g) The association between the application of the tests and the evaluation of the quality of education, a concept that is not universal.

One of the points raised at the Encuentro Nacional "Más y Mejor Educación para Todos: Desafíos para la próxima década", (National Congress "More and Better Education for All: Challenges for the Next Decade"), held in Buenos Aires on 30-31 October, was getting out of PISA. See note of Página/12 (Spanish).

The congress was organized by the two most important teacher unions in Argentina (CTERA and SADOP); two new universities (UMET and UNIPE), and CLACSO. The event was promoted also by Argentina's National Congress.

The article elaborates the arguments behind the proposal of "getting out of PISA" presented at the national congress in Argentina (30-31 October). The proposal goes beyond Argentina and other Latin American countries engaged with PISA. University rankings are revised and questioned, as well as the overall ranking culture applied to education, PISA included. Criticism to PISA is illustrated with cases such as that coming from a group of intellectuals and academics in the US, Canada and other developed countries, the Statement by CLACSO Working Group, and the article by Rosa María Torres in Ecuador.

Comunidad Educativa, the community of signatories of the Pronunciamiento Latinoamericano por una Educación para Todos (Latin American Statement on Education for All, containing critical positions on educational evaluation) discusses the issue and the possibility of a statement saying NO to PISA.

What do Cuba and Finland have in common?

Two very different countries, one in the Caribbean, the other one in Europe, with very different histories and cultures, very different political, social and education systems, and yet both sharing high international recognition for educational and other social achievements.

▸ Finland is number 24 in the world. Cuba - together with Chile and Argentina - is in the group of Very High Human Development Index in Latin America, and number 44 in the world. (HDI 2014).

▸ Cuba and Finland are the best countries - in Latin America and the Caribbean, and in the world, respectively -  to be a mother and raise a child, according to Oxfam's State of the World's Mothers Report 2013 (Cuba ranked 33 worldwide).

▸ Cuba's and Finland's education systems are public and free, from initial education to the end of higher education.

▸ In the Latin American region, Cuba is the country with he highest investment in education in relation to its GDP. Cuba invests 16,3% of its GDP in education, followed by Bolivia, Honduras, Costa Rica and Argentina. (Source: ECLAC)

Equity first: good education for ALL, nobody left behind

▸ Both Cuba and Finland are egalitarian societies. Equity is the main concern. Nobody should be left out or left behind. "Every school a good school" is Finland's motto, and  Cuba's as well.

▸ It is not rare to hear/read comments referring to both Cuba and Finland as "boring" places - Finland because of its weather; Cuba because of its political system and its precarious entertainment resources - and mentioning this as one of the factors that would explain people's dedication to education, studying, and reading. In the case of Cuba, we have seen this argument mentioned in reports by US academics and researchers.

▸ Cuba and Finland are among the one third of countries that achieved 2000-2015 Education for All goals worldwide. Cuba was the only country achieving them in Latin America and the Caribbean.

Finland is well known for its high performance in PISA, which assesses competencies in Reading, Mathematics and Sciences among 15 year-olds. PISA has been applied every three years since 2000.

LLECE tests have been applied three times so far:

- The Second Study (SERCE) was applied in 2006 in 16 countries plus the state of Nuevo León in Mexico, to third and sixth grade students on Mathematics, Reading and Writing, and Natural Sciences. Cuba ranked first.

- A Third Study (TERCE) was applied in 2013 in 15 countries plus the state of Nuevo León (Mexico). Cuba did not participate this time. In Cuba's absence, Chile ranked first.

Everyone knows about Finland's remarkable performance in PISA. Few people know that Cuba has been number one in regional LLECE tests. It is important to reiterate that LLECE tests are applied to both public and private schools (Cuba is the only country in the region that has only public, state-run, schools).

Cuba's results in LLECE showed a huge difference with respect to the other participating countries (including Chile, for many years considered an 'education model' in the region, and the Latin American country that has so far achieved the best results in PISA).

LLECE countries were divided in four groups according to their results in the Second Study (SERCE):
Cuba is also the country with the highest "school life expectancy" in the region (16.2 years), followed by Argentina (16.1) and Uruguay (15.5). While many countries in the region are still struggling with universalizing basic education, Cuba is trying to universalize higher education.

In conclusion: Finland and Cuba are 'successful' school systems according to the instruments and indicators applied by international organizations - OECD and UNESCO, in this case - to measure desirable social and educational achievements.

And yet, while Finland is internationally known and viewed as an inspiring "education model", Cuba does not enjoy the same type of recognition -- regionally or internationally. Questionable international indicators? Lack of information? Prejudice? Double standards? Something to reflect upon.


Most of what we read about education in Finland is good news. However, it is difficult to believe that the Finnish education model is problem-free. Finnish education expert Pasi Sahlberg - author of Finnish Lessons - shared on Twitter (May 2013) his views on the Top 10 issues Finland's education faces today. I translated them into Spanish (see below).

Issue 2: Finnish teachers fear that there'll be more central control & standardized testing in the future. Many would consider another job.

Issue 3: Finnish kids say they don’t like school. But they like education. Old model of school is dead. What would wake up Finns to change?

Issue 5: Finland has invested heavily in technology in schools during the last 2 decades. It remains underused in many schools. What next?

Issue 8: Pundits and politicians rather than experts and practitioners dominate public discussion in Finland; opinions before expertise.

Issue 9: Finnish school system has no engine for innovation. PD is thought to be enough. School-driven innovation is haphazard and rare.

Issue 10: Teachers feel their authority to manage student behavior is decreasing. Jobs are at risk due to unclear lines of authority.