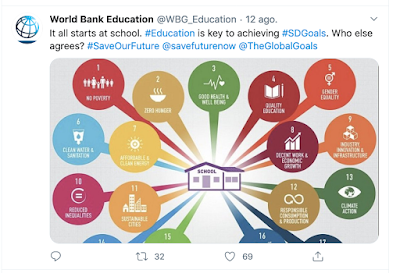 This graph of the 17 Global Sustainable Goals (SDGs) was circulated by the World Bank on Twitter with the following text:

"It all starts at school. Education is key to achieving SDG Goals. Who else agrees?".


I replied saying I disagree. When referring to education, it is not true that it all starts at school.

It all starts at home.

Despite its fundamental role, especially in early childhood, 'home education' or 'family education' is often ignored or sidelined.

The Lifelong Learning paradigm acknowledges that learning is a continuum that starts at birth. Early Childhood Care and Education officially cover from birth to entry into primary school (UNESCO-GEM Report Glossary 2020). Parents, grandparents and other caregivers play the most important role in this early stage of life.

Studies and evaluations throughout the world consistently ratify that family conditions and backgrounds are a major factor in children's present and future life prospects. Parental education is a factor with tremendous impact on children's education and learning in school; it is responsible for over 50% of student achievement in various kinds of national and international standardized tests, including PISA.

Millions of children do not attend school or stay in school only for a short period of time. For them, the family and the community are their main education and learning environments.

School is not a starting point in terms of knowledge. When children arrive in school, they are not blank slates; they know a lot. Some of the fundamental and long-lasting learning experiences take place in early childhood. Without tutors, children become fluent speakers of their language. They know many things about the natural and the social world around them, and have learned to interact with them in many ways. Research shows that important values and attitudes are developed in these early years, prior to any school experience.

School age and school entry may be too late for many interventions. Child malnutrition is high in many counties among children between 2 and 5 years of age. Chronic malnutrition, if not dealt with on time, condemns children to physical, emotional and cognitive problems that may affect them for the rest of their lives.

Contrary to popular belief, reading and writing do not begin at school. Abundant research shows that home and the local community play a key role in stimulating the curiosity and the initial contacts with the written world. Differences between children who have rich cultural contexts at home and those who do not often result in important differences in terms of learning achievement in reading and writing in school.

So: when it comes to education and learning, and seen with a Lifelong Learning perspective, it is not true that all starts at school. It all starts at home and we must make sure to provide families with the best conditions possible to raise and educate their children, including dignified living conditions and parental education.

Literacy: From all to "a substantial proportion of adults" 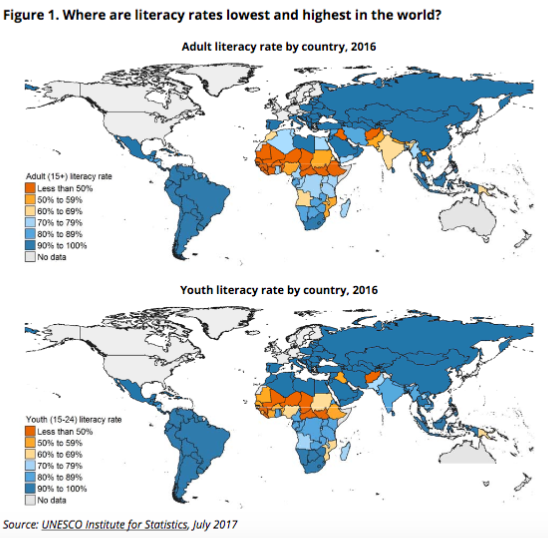 Between 1980 and 2015 the goal referred to youth and adult literacy went from "eradicating illiteracy" (Major Project of Education for Latin America and the Caribbean, 1980-2000) to "all youth and a substantial proportion of adults, both men and women, achieve literacy and numeracy“ (Sustainable Development Goals, 2015-2030).

In other words: current SDGs propose universal literacy for youth (15 to 25 year-olds) and an undefined goal for people beyond 25 years of age. This contradicts the Lifelong Learning rhetoric as well as SDG 4, referred to education: "Ensure inclusive and equitable quality education for all and promote lifelong learning."

In 1980, the Major Project of Education for Latin America and the Caribbean - MPE (1980-2000) was approved in Mexico. MPE was coordinated by UNESCO's Regional Office in Santiago, Chile. MPE proposed to achieve three goals by the year 2000. One of them was "eradicating illiteracy". The final evaluation of the project, in 2000, revealed that the goals were not met.

1. Eight to ten years' minimum schooling for all children of school age.
2. Eradication of illiteracy and expansion of educational facilities for adults.
3. Improving the quality and efficiency of educational systems and education in general, through the implementation of necessary reforms and effective systems designed for measuring learning.

The Education for All (EFA) world initiative was approved in1990 at the World Conference on Education for All held in Jomtien-Thailand. EFA proposed six basic education goals that covered children, youth and adults, in and out of school. One of those goals (goal 4) was reducing the adult illiteracy rate by half. EFA's evaluation, presented in 2000 at the World Education Forum in Dakar, concluded that the goals were not met. The decision was to postpone the goals for another 15 years.

1. Expansion of early childhood care and development activities, including family and community interventions, especially for poor, disadvantaged and disabled children.
2. Universal access to, and completion of, primary education (or whatever higher
level  of education is considered “basic”) by 2000.
3. Improvement in learning achievement such that an agreed percentage of an appropriate age cohort (e.g. 80% of 14 year-olds) attains or surpasses a defined level of necessary learning achievement.
4. Reduction in the adult illiteracy rate (the appropriate age cohort to be determined in each country) to, say, one-half its 1990 level by the year 2000, with sufficient emphasis on female literacy to significantly reduce the current disparity between the male and female illiteracy rates.
5. Expansion of provision of basic education and training in other essential skills required by youth and adults, with programme effectiveness assessed in terms of behavioural changes and impacts on health, employment and productivity.
6. Increased acquisition by individuals and families of the knowledge, skills and values required for better living and sound and sustainable development, made available through all educational channels including the mass media, other forms of modern and traditional communication, and social action, with effectiveness assessed in terms of behavioural change.

In 2000, at the World Education Forum held in Dakar-Senegal, the six EFA goals were ratified, with some modifications. The goal referred to literacy (goal 4) remained as "achieving a 50 per cent improvement in levels of adult literacy". EFA's final evaluation in 2015 confirmed that the goals were not met. EFA remained as an "unfinished agenda".

1. Expanding and improving comprehensive early childhood care and education, especially for the most vulnerable and disadvantaged children.
2.  Ensuring that by 2015 all children, particularly girls, children in difficult circumstances and those belonging to ethnic minorities, have access to and complete free and compulsory primary education of good quality.
3. Ensuring that the learning needs of all young people and adults are met through equitable access to appropriate learning and life skills programmes.
4. Achieving a 50 per cent improvement in levels of adult literacy by 2015, especially for women, and equitable access to basic and continuing education for all adults.
5. Eliminating gender disparities in primary and secondary education by 2015, with a focus on ensuring girls’ full and equal access to and achievement in basic education of good quality.
6. Improving all aspects of the quality of education and ensuring excellence for all so that recognized and measurable learning outcomes are achieved by all, especially in literacy, numeracy and essential life skills.

In 2000 the United Nations launched the Millennium Development Goals (MDG), a global multisectoral agenda with eight goals to be achieved by 2015. The goal referred to education - Goal 2: Achieve universal primary education- focused on children (completing four years of schooling). It was not met. The MDGs did not include a goal for adult literacy.

In 2015, both EFA and MDG goals reached their deadline, and the Sustainable Development Goals (2015-2030) were approved. The Agenda 2030 was organized around 17 goals. SDG 4 refers to education:

The target related to literacy (target 4.6) reads "by 2030, ensure all youth and a substantial proportion of adults, both men and women, achieve literacy and numeracy.“

According to UNESCO (2016 data, projected to 2017), in 2017 there were 260 million children who could not read and write, and 750 million adults in the same condition. Women continued to be two thirds of the adult illiterates. 102 million were young people between 15 and 24 years of age. Globally, between 2000 and 2015, the youth and adult literacy rate increased only 4%.

In most countries, literacy/illiteracy data continue to be collected through census and house surveys where people respond Yes or No to the question of whether they are illiterate.

¿Lifelong Learning opportunities for all?

With regards to youth and adult literacy goals, between 1980 and 2015 we moved from "eradicating illiteracy" to ensuring universal literacy for youth and reaching "a substantial proportion of adults.".

The document also explains that (p. 13):


"The principles, strategies and actions for this target are underpinned by the contemporary understanding of literacy as a continuum of proficiency levels in a given context. It goes beyond the understanding of a simple dichotomy of ‘literate’ versus ‘illiterate’. Therefore, action for this target aims at ensuring that by 2030, all young people and adults across the world should have achieved relevant and recognized proficiency levels in functional literacy and numeracy skills that are equivalent to levels achieved at successful completion of basic
education."

Today, the SDG Agenda proposes universal literacy for youth and reaching "a substantial proportion of adults." Once again, we must expect adult literacy to have no priority.

This happens at a time when Lifelong Learning is proposed by UNESCO as the educational paradigm for the 21st century and in the framework of an education goal that promises to "Ensure inclusive and equitable quality education and promote lifelong learning opportunities for all." 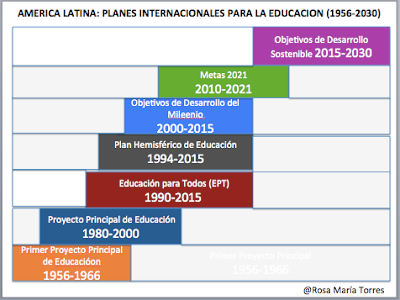 
The world is focused today on the Sustainable Development Goals (SDG) and the 2030 Agenda. In terms of education, governments are focused on advancing and achieving SDG4: "Ensure inclusive and equitable quality education and promote lifelong learning opportunities for all".

Few people are aware of the history of previous international agendas. In the case of Latin America and the Caribbean, over the past decades this region has been the scenario of multiple international initiatives and plans for education: regional, global, hemispheric, and IberoAmerican.

The first regional plan was adopted in 1956. The graphic above and the table below show the plans and goals adopted since then. None of them accomplished the proposed goals within the proposed deadlines.

Moving successfully into the future requires looking back, knowing and better understanding the past. Six decades were not enough to reach modest primary and basic education goals (1956-2015). Will 15 additional years (2015-2030) be able to achieve more complex and ambitious education goals?